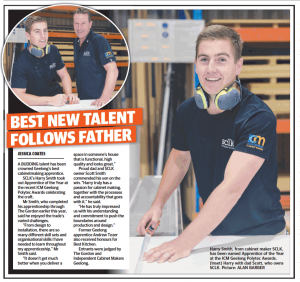 A BUDDING talent has been crowned Geelong’s best cabintemaking apprentice.

SCLK’s Harry Smith took out Apprentice of the Year at the recent ICM Geelong Awards celebrating the craft.

Mr Smith, who completed his apprenticeship through The Gordon eariler this year, said he enjoyed the trade’s varied challenges.

“From design to installation, there are so many different skill sets and organisational skills I have needed to learn throughout my apprenticeship,” Mr Smith said.

“It doesn’t get much better when you deliver a space in someone’s house that is functional, high quality and looks great.”

Proud dad and SCLK owner Scott Smith commended his son on the win. “Harry truly has a passion for cabinet making together with the process and accountability that goes with it,” he said.

“He truly impressed us with his understanding and commitment to push the boundaries around production and design.”

As seen in the Geelong Advertiser, 10th December, 2020

BROWSE THROUGH SOME OF OUR LISTINGS